I had an excellent speed work session today. My goal was to get 7 1-mile repeats in this morning. I bailed on running last night -- the normal Tuesday evening speed work time -- because it rained all day and well into the night.

The speed goal was 7 minute miles (4:22 per kilometre) and the first two miles were pretty much right on. On the third mile, I got through the first 1000 metres and my time was 4:15 (6:50/mile) -- so I kept going at that pace. And for the remaining 4 miles after that, as well. Here are the per mile splits:

So it definitely went well. The temperature helped -- 10 degrees C. -- but it was humid with the fog fairly thick through out the run. But the fog kept the sun at bay, too, so maybe that was a good thing.

I'm feeling stronger and more confident as we get into the higher mileage weeks, which is good!
Posted by Bruce Lamb at 9:01 AM No comments: 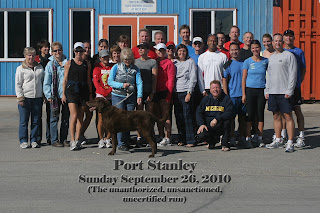 I had a really good long run today. The Legendary John Ferguson's marathon training group had a light day today because most of them are going in the Corning Marathon next weekend. So Janice and Nancy organized our own run to Port Stanley from London and there were about 30 runners who took part.

The weather was excellent. No wind to speak of, and the temperature when we stated was around 8 degrees C. When we finished, I'm guessing it was around 14 degrees C and the sun was shining, which made it feel warmer than that. But all in all, pretty good running conditions.

Here are my kilometre splits:

My average time for the run was 5:00 per kilometre. There were 7 water stops along the route, and I stopped at them all for an average of 1:12 -- but it was a bit longer at the last two stops when I was working harder (and they had fruit!).

My plan was to run faster down the hills and slightly slower than target pace up the hills -- which is why you see the 5:15 and 4:55 paces in the list -- the previous kilometres more than made up for the slowness in those laps.

Anyhow, tacking on another 3.2 would not have been a problem today. My left ankle was talking to me just about the whole way (but is fine now as I'm typing this post) and both calf muscles were screaming at me near the end -- but nothing I couldn't handle.

With Coach Brian's sore hamstring, he wanted to take it easy for his run tonight. Fortunately, 'easy' for him is tempo pace for me, so we ran from his place for our 8 mile tempo run. The run was shorter this week for three reasons. I was just barely recovered from my long run last Monday, and I was due to run my longest long run of the training program thus far this coming Sunday -- 22.68 miles.

Despite the fact that the run was 2 miles shorter than last week, it was still a tough run. It was warm and humid out so the air was a bit thick. We were able to carry on a conversation for the first 4 'easy' miles, but when we turned around to head back to Brian's place, the conversation dropped off noticably. I was breathing hard.

There was a wind from the south, but to me it felt like it was a tiny bit into my face, so I had to work hard to keep pace. But, strangely, I managed to get stronger throughout the fast part of the run.

When we turned south towards Brian's house, the wind was right in our faces. But Brian took the lead and I followed about 1.5 strides behind him -- and the running actually felt easier than when when we were running with the wind coming across our bow. Here are our mile splits:

The best thing about taking off from Brian's place, though, is the ready access to my favourite form of rehydration: Guinness beer! A couple of Guinness and some stimulating conversation with Brian and Bridget and I was fully recovered!
Posted by Bruce Lamb at 9:48 PM No comments:

Today I joined the legendary John Ferguson's Runners Choice marathon training clinic at the TD Waterhouse Stadium track at the University of Western Ontario in London. The speed work tonight was to be 7, 8 or 9 mile repeats and Brian and I thought 7 would be good since I'm still quite a ways out from the marathon.

As I started my warm-up mile I could feel my left calf talking to me. It was still tight from yesterday's long run. But as we got into the first speed work mile, it didn't feel too bad.

I ran with Rishi Kumar who had paced with me at the London Springbank Park Half Marathon a couple of weeks earlier. Our speeds are pretty close to the same.

It was warm out tonight -- 25 degrees C. (77 F) when we started and a bit muggy. So by the time we were done our first lap, we knew it was going to be a tough night for running.

We targeted 7 minute miles and our first was a bit fast -- 6:47. But most of that extra speed was in the first lap, so we had settled into a nice pace for most of the run. The next three laps were just a second or two under the 7 minute mark, so we had a good steady pace going.

But by then, a problem started appearing. That sore calf was beginning to really talk to me in that 4th mile. I chatted with Brian at the break between the 4th and 5th mile and he had pulled out because of a sore hamstring muscle. We agreed that I'd try to do the 5th mile but if I wasn't able to loosen it up, I should quit. After one lap, it was still really tight so I pulled out.

So, not a very successful night for running. Or, perhaps, the attitude should be that it was successful, because I didn't get injured. We know from experience that there is a fine line between working your muscles hard enough that they are sore and repair themselves even stronger than before -- and working them too hard that they can't be repaired in time for you to race strongly. I'm pretty sure we didn't cross that line.

2 days rest and then we'll see how I fare on the tempo run!
Posted by Bruce Lamb at 9:33 PM No comments:

I did take three 2-minute walk breaks at the 8K intervals. I ate one Carb Boom Energy Gel every mile for as long as I could -- but eventually I ran out of moisture in my mouth. I think they will work fine for the first half the marathon, but then I'm going to have to start doing sport drink or something. We'll see. I'll see if having water more than every 8k works to keep the moisture in my mouth when I run Port Stanley next weekend. I'm going to need some form of carbs to keep my energy levels up!

Anyhow, we'll chalk this up as a fairly successful run!
Posted by Bruce Lamb at 5:26 PM No comments:

Jenny and I joined the Runners Choice marathon training group tonight, coordinated by none other than John Ferguson, the legend, to do our tempo run. Coach Brian wanted me to do 10 miles, with the first five at long run pace and the last five at a better-than-marathon-pace. So I went out targeting 5:11 per kilometre (8:20/mile) and wanted to do 4:40/kilometre (7:30/mile) on the way back. Here are my kilometre splits:

The weather for this run was pretty good -- 18 degrees C. and overcast -- and I felt strong the whole way. Chalk it up as another good run!
Posted by Bruce Lamb at 10:15 PM No comments:

The weather was excellent. About 7 degrees C. (45 F.) and with a slight wind from the east, which made running east more work than running west. All in all, it was a good workout. My muscles are appropriately sore, so it must have been good!
Posted by Bruce Lamb at 8:58 AM No comments:

2010 Springbank Half Marathon - A good race!

Coach Brian had me scheduled to do 17 miles today, but the Runners Choice marathon training group was going to do the Springbank Half Marathon in preparation for the Corning Marathon in 3 weeks. John Ferguson, the legend, wanted everyone to "race" it -- not just use it as a marathon pace run. But Coach said that since I was still 8 weeks out from the marathon, running it as a pace run would be a good idea. To put an added twist, though, he wanted me to do 4 warmup miles before the race.

So, I would say my conditioning is definitely improving. Perhaps not quite as good as I was last year for Boston, but definitely getting close. Brian said I can put this one in the books as another successful run!
Posted by Bruce Lamb at 7:37 PM No comments:

Wow, does the cooler weather (and a bit of a rest) ever make a difference!

I didn't do speed work on Tuesday because I bruised the sole of my right foot when I ran over a stone on my Monday long run. I figured that I shouldn't do something that would cause more problems, so I rested until it felt better.

But a funny thing happened! I couldn't keep my times slow enough going out, and had excess energy coming back, so I stepped it up! Here are my kilometre lap times:

This definitely makes up for some of the tough runs earlier in the training!
Posted by Bruce Lamb at 8:59 AM No comments:

I had a tough time on a couple of the latter 'fast' laps as I was heading directly into the stiff breeze, which had a significant effect on time and effort. Once I turned the corner, though, I was able to get back into my rhythm and ramp up the pace for the last 1.2 km.

Overall, quite a good run. Muscles are sore, which is good.
Posted by Bruce Lamb at 11:28 AM No comments:

Jenny and I managed to get into London to join John Ferguson, the legend, and the Runners Choice London Ontario marathon training group for our tempo run. The weather was a tad warm -- about 26 degrees C. -- although it seemed to cool down a bit during the run. Not much, but enough to make the fast return section of the run more bearable. My goal was to do 30 seconds above race pace going out (5:11/k. or 8:20/mile), and 20 second faster than race pace on the way back (4:40/k or 7:30/mile). Here is how the splits looked:

No question it was a tough run -- and those hills near the end approaching Blackfriars bridge really take it out of your legs -- but I finished well under target time for the trip back, so I was pleased.
Posted by Bruce Lamb at 11:13 PM No comments:

Today we stepped up the number of one mile repeats to 6, each separated by a 2.5 minute break. I started early -- 6:45 AM, but the sun was rising and therefore the temperature was starting to rise as well. Best guess is that it was 21 degrees C. when I started and 23 when I finished. But those temperatures are in the shade. In the sun it was easily 3 or 4 degrees warmer.

So I hit the targets pretty much right on. I was sweating profusely during the run -- my hand towel that I carry was soaked -- but taking off my shirt after first 2 miles definitely helped to keep me cooler.

Anyhow, another successful run!
Posted by Bruce Lamb at 8:25 AM No comments: