I don't know if I ever considered way back in July 2007 when I started writing my thoughts in this blog about my quest to qualify for the Boston Marathon, that less than 11 years later I would have completed five 'Bostons'! 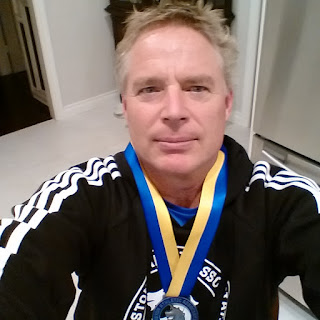 The most recent was yesterday's 2018 Boston Marathon.  It was brutal.  It was cold (4 degrees C / 39 F at the start -- although that is actually a good running temperature for me) but also windy (25 - 40 km/hr winds, right in your face) and raining.  I'd definitely believe predictions of 4 cm (1.5") of rain during the marathon.  The rain never stopped.  Sometimes it would seem to lighten up a bit -- and then a deluge would come and bring you back to earth.  But 25,746 of us finished (26,948 started) so I'm proud to be among that group.

Anyone who completes a marathon is a hero in my mind.  But anyone who completed yesterday's marathon had to have something extra, for sure.  Drive?  Perseverance? Guts? Stubbornness? I don't know. All I know is that I was quite proud to being among those people who made it the full distance yesterday.

Unfortunately, though, this may actually be my last 'Boston'. We'll have to see, of course, but I have been diagnosed as needing a hip replacement, so there is definitely a question as to whether I'll be as strong as I need to be in order to get another BQ.  Time will tell.

What is very interesting is the elevation and speed chart:

My prior Boston experience helped on this run.  I knew I had to save energy for the Newton hills.  I knew some of those hills were long, but definitely do-able.  I knew that once you were done the hills, it was generally downhill from there and you just had to keep putting one foot in front of another to make it to the end without stopping.  In fact, my goal (which I achieved) was to not walk at all.  I did stop three times for kisses -- once at Wellesley College, and twice when I saw Jenny on the route.  But then I got right back to the run.

So I kept slogging along.  At first my goal was to hit a respectable time in the first half of the marathon. 1:53:41 was slow, but considering the weather, it was respectable.  And then my goal was to just keep moving forward as I was able to count down the miles until the finish, trying to ignore the pain in my left hip: 12 miles -- that's just a loop of Springbank Park from Gibbons Park.  10 miles -- that's just from Gibbons to the Pump House and back.  8 miles: I'm almost two-thirds done! Gibbons to Guy Lombardo Museum and back. 6 miles -- just a little 10k run.  5 miles -- right after Heartbreak Hill -- that's just around a country block. 2 miles: That's just an out-and-back for Mile Repeats at Gibbons Park.  And that is how I got through it.

The volunteers and fan support definitely helped.  Apparently 9,500 volunteers signed up to get us on the buses to Hopkinton, give out water and Gatorade along the route, help in the medical tent, give out medals, ponchos and food after the race, keep spectators off the road and I'm sure a thousand other tasks that needed to be performed.  And while a typical Boston Marathon might have as many as a million people lining the route, I'd be willing to be that half that number came out in the cold, wind and rain to cheer us on.  Even with the conditions, I had to really look hard to find Jenny in the crowd the two times I met up with her.

At the end, I ran across the finish line upright and smiling, which was a definite improvement on 2009's finish when I crawled across the finish line.  After that, though, I stiffened up very quickly.  I got my medal and 'heat poncho' and made my way to the hotel which was only about 600 m. away.  But it probably took me 15 minutes to get there. I was walking like a stick man, and leaning up against buildings as I made my way to the Park Plaza hotel.  Eric was there -- already showered and changed -- and Jenny arrived shortly afterwards.  I got into a warm bath and had a beer and after about a half hour of that I started to feel like a human again!

If I had to do anything different, I would have trained a bit faster.  I did a lot of long runs at a 5:45 to 6:00/km pace.  I really should have been at a 5:19 pace, which was my long run pace when I trained for my personal best in 2015.   Realistically, though, I don't know that my bum hip would have let me go that fast.  The 55-70 mile/week Advanced Marathoning plan was the one to do, for sure, which meshed very well with Coach John Ferguson's marathon training clinic at Runners' Choice in London.  While I didn't set the world on fire with my finish time, I felt that I was able to finish respectably considering the course and conditions.

Boston, you are a tough beast to slay, and you were tougher this year than most others.  I hope we shall meet again!
Posted by Bruce at 10:04 PM

I love your recollection of your experiences in Boston. Very well said and I am truly happy you completed it in the fashion you wanted. You came a long way from the run/walk back in November/December time frame. I surely hope your hip work allows you to be comfortable but also hopefully in a position to run Boston once again. Great job Bruce!

Thanks, buddy! I'd forgotten about that December run! Yes, in that respect, going 42.2 km without walking was not a bad result! Well, I guess I have a new goal. To see if I can qualify for Boston after a hip replacement! There will be many more runs together in our future, I'm sure.

Great run Bruce and incredible story. Funny how you breakdown the race into recognizable parts. I do the exact same thing, it makes the race easier to do. Congratulations.