This weekend, our relay team -- The Geezer Guys -- ran in the Ragnar Adirondacks race. The race took us from Saratoga Springs NY to Lake Placid NY -- along the prettiest fall countryside you can imagine.

If you've never done a long distance relay race before, they are a blast. This is my third "Ragnar", but I've also done 2 Shore-to-Shore relays, and 2 Simcoe Shores relays. Relays turn what is otherwise an individual sport into a team sport. It takes good organization as well as good runners to do well.

We had a tough time trying to get a full team of twelve runners who were all 50 or over. We "rounded up" in order to get Dave Ladouceur to join (his birthday is in a month). A variety of issues -- mostly related to running injuries -- kept a number of our runners from joining us, so we ran with eleven runners:

Brian Murphy wasn't sure if he'd be able to run after he pulled a muscle in his calf. We'd have to wait to know if we were running with 10 or 11 runners.

The average age of our team was 57.3 years young.

Dave Korell at New Balance was kind enough to provide the team technical shirts, which we all agreed were the best Geezer shirts yet.

Our start time was 9:30 on the Friday morning. If all went perfectly (which we weren't expecting), we'd be across the line by 11:02 AM on Saturday morning.

My last leg was back in the heat of the day (10:19 AM) and, yet again, more hills. At least it was a shorter run of 4.8 miles. But it seemed to be all uphill! In fact, though, I climbed 225' over the last 1.5 miles of the run -- and I had to walk a couple of times. There was a runner about a hundred feet ahead of me for almost the entire run and when I walked, he didn't actually get much further ahead of me. I passed two other runners (net) during this run. My time over the 7.63 kilometre course was 39.35 or 5:11/k.

For the first two legs, our van was able to provide me with excellent support, which kept me going. Because these runs were relatively short, I didn't need food until I got back to the van and just had water every mile or two. Back in the van, I was able to get something into my stomach with CLIF Bloks and CLIF protein bars.

During our time in the van, the boys chatted about "Wino" Geezer, Lawrence Trickey, who couldn't join us this time, but who had these sage words of running wisdom:

Never compromise form!
Never miss an opportunity!
Leave your blood on the road!

And this word of encouragement by email when we were getting ready to depart London:

Run 'til the blisters, blister!

The first one became our mantra. As I was tiring at the end of the run, I would repeat "Never compromise form!" and make sure I was doing all the things to get the most out of every stride. 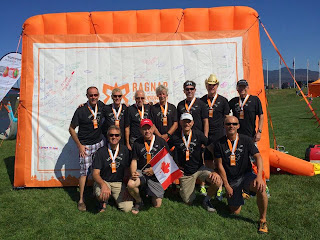 After we crossed the finish line and got quite a few photos, we made our way to the beer tent. And did we ever party! Chugging contests with other teams, singing of O Canada twice, lots of boisterousness, and at the end (4 hours and several hundred dollars of beers later), doing shirt swaps with members of other teams. None of us went back to the hotel with our much coveted Geezer Guys shirts that had been gratefully donated by New Balance. (Wheezer and Ripper stayed sober so that we could get the vans back.). 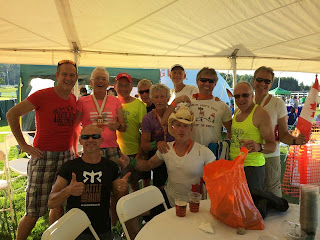 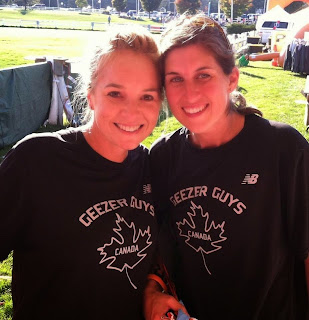 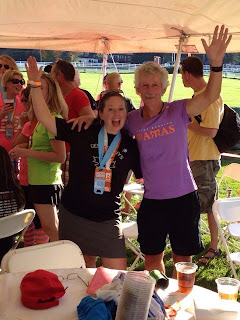 The next day, we toured around the picturesque town of Lake Placid. We did some bobsled runs (with the sleds on wheels) at the olympic bobsled park, we went up to the top of the ski jumping tower, went to the oval skating track and hockey rinks, and sampled some local craft brews. And we were recognized by all sorts of folks who'd been in the beer tent with us. We were sort-of celebrities.


Tips for Next Ragnar:

We're getting pretty good at this. The vans were well-organized. Everyone was watching out for everyone else to make sure we kept on track. A member of each van kept touch with each other via text messages so that we knew how long each runner was taking, so that we could gauge when we'd be doing the hand-off to the next van. (There was one close call where Van Uno misjudged the time we'd be coming in. When Van Doo showed up, everyone in Van Uno was asleep! Everyone went into action quickly and we solved it and the mishap only cost us 10 seconds!). Little things like having a large container of Huggies Baby Wipes (big thick disposable cloths) to allow us to wash down afterwards were great. We had large plastic Canadian flags left over from the Canada Day run, and we hung one of those out the back of the van like a cape. It made it much easier to see our van from afar, especially at night if the lights were on in the van. On any runs where the route had several turns, the runners ran with a map so that we could refer to it if we got lost. So there were just a couple of things that I'd do differently:

1) In the case of an injured runner, don't have the fill-in runner do back-to-back runs. Even a half hour rest can make that second leg a lot faster.

2) Order double the number of shirts. We did the shirt swap, so we lost our much-coveted Geezer Guys shirts from New Balance, which were quite nice!

3) I should have brought my helmetCam -- not for the runs, but for the bobsled adventure afterwards!

4) Trying to take photos of the slap-bracelet (baton) hand-offs with my phone was useless. Video or a real instant shot camera would have been much better. (The smart phone takes a second or two to focus -- and by that time the runner is gone!)


In summary, the race was challenging, the team was awesome, and we all had tons of fun! Best. Ragnar. Ever.