"Those damn runners think they own the road. I'll show them!"

I can practically hear the thoughts of a few of London's drivers. "Look at those runners running on the streets instead of the sidewalks where they belong. I'll show them."

And with that, we see the vehicle approaching us either give us practically zero room at the side of the road, or in some cases (twice in the past week) will actually edge over and force runners to climb up onto the snow banks lining the road. This morning, a driver in a Dodge truck license [333 5WM] forced a bunch of us off the road while we were running south on Wonderland Road.

To be fair, the vast majority of London's drivers are great. They'll slow down when they see a runner approaching them at the edge of the road and, if available, they'll change into the centre lane to give us lots of room. I'd guess that over 99% of the drivers in London fall into this camp. I go out of my way to wave 'Thanks!' at drivers who drive in the centre lane to give us room, and I know that many other runners wave at these respectful drivers as well. 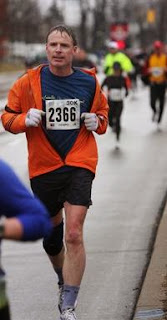 But the 1% that chooses to make a point by running us off the road is not only creating a dangerous situation, but they are also breaking the law. The law allows us to be on the left-most edge of the road, running facing traffic. Drivers, by law, must share the road with bicycles and pedestrians, or they could be charged with "Failing to Yield". And, of course, a lot worse could happen if a runner slips as a non-yielding car goes by. The civil liability if someone gets hurt or killed would be substantial, not to mention the emotional impact of the driver knowing they killed or hurt someone with a family depending on them.

I'm going to start carrying a body-mounted video camera for my long runs on London's streets. And the next time a driver decides to not share the road, as they are obligated to do by law, I will be pressing charges. Maybe after a couple of London drivers find themselves in front of a judge with irrefutable evidence, the word will spread that we all need to share the road, and that roads are not the exclusive domain of cars and trucks.

Training for a long distance race is a lot of work, and it is simply impractical to do this training anywhere other than the roads -- especially during the winter, when the sidewalks are treacherous most of the time.

Please share this post with drivers you think may not know the law with respect to yielding to runners. It could save a life.
Posted by Bruce Lamb at 10:32 PM